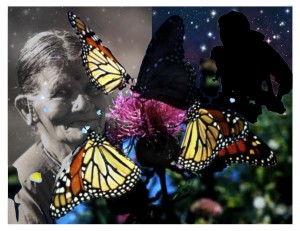 Â Eating Dead Butterflies Â 4:06 (Live audio excerpt from One Earth/One Dream, including two other short dreams and the words of Michael Meade.)

Last night I asked to have a dream regarding the truth about my relationship. Â In my dream, we went to see a wise woman, and I asked her to read the cards for me to find out what was in my partner’s heart. Â She said she wasn’t in the mood, but then she offered us a snack, which was some kind of biscuit and a dead monarch butterfly.

Â I have been seeing live monarch butterflies a LOT over the last three months. Â I lived through the recent Christchurch earthquake, and they have a lot of significance for me, as a friend of mine (who was also my partner’s best friend) died in it, and the last photo taken of him had a monarch on his hand.

Â They were definitely his soul brothers; the big brother my partner’s mother lost before him, the soul he’s looked for all his life, his twin. Â His friend and I had a connection so deep, I can’t even begin to describe. Â The three of us did things on a spiritual level that kick the ass of all other experiences…it was huge stuff!

We only knew him for under a year before he died. Â It was so intense. Â We still reckon he’s around…happier than ever, to be honest. Â He always HATED having a body. Â I think I was the first person to ever really hug him. Â Man, he was cuddly after that! Â Hugs for all!

In my dream, I wondered aloud if we should eat the dead butterfly, and then we all had a bite. Â It was the oddest sensation. Â It felt kind of special, significant, a sharing.

Â I thought this was an important dream, one I should not hide away in my notebooks.

Back to Dream Gallery